It had been awhile since we’ve been back to Dirty Habit, so we jumped at the chance to return when Taylor Strategy, representing Diageo (the world’s largest alcoholic beverages company), invited us to attend the Blade & Bow Kentucky Straight Bourbon launch there.

Blade & Bow is a new whiskey from Diageo, similar to but not part of the Orphan Barrel series featuring bourbons from the famed Stitzel-Weller Distillery. Opened on Derby Day in 1935 just outside of Louisville, the Stitzler-Weller Distillery operated and produced several well- known brand bourbons until the end of 1991.  After famed master distiller Pappy Van Winkle passed away in 1965, it underwent several ownership changes starting in 1972 and eventually transferred to Diageo.  They used it as a rick house to age several of their whiskey brands and have recently reopened the historic distillery as part of the Bulleit Bourbon Experience.

Paying homage to the historic home of the fathers of bourbon, the Blade & Bow whiskeys are “inspired by the passion and craftsmanship of the legendary Stitzel-Weller distillery.”  There are two versions of Blade & Bow Kentucky Straight Bourbon Whiskey: the base version made with a solera method, and a limited release 22-year old.  The latter, aged and bottled at Stitzel-Weller, is made from a blend of aged Bernheim (a wheated whiskey) and Buffalo Trace bourbons.

When we arrived at Dirty Habit, located on the fifth floor of what was then the Palomar Hotel but is now Hotel Zelos, we were directed to the private event room adjoining the patio.  We’ve been to Dirty Habit plenty of times, but we usually sit at the bar or lounge and had never even seen the patio.  What a mistake on our part — the patio is pretty awesome, with plenty of zen style water- or fire-side seating opportunities.  For the event they hired a guitarist (left) and set up a small bar serving four excellent cocktails made with Blade & Bow’s base whiskey and specially crafted by Dirty Habit’s Sarah Ruiz (click on photo to enlarge).

We like our drinks on the boozy, side so we started with the Blade & Bow Manhattan (left), a derivative of the classic with a touch of Cherry Heering, and a Bay Bridge (right) made with Sherry, Licor 43 and tobacco bitters.  Both drinks were excellent and helped us adjust our attitude after a full workday. (Note: all cocktail recipes can be found at the end of this post). 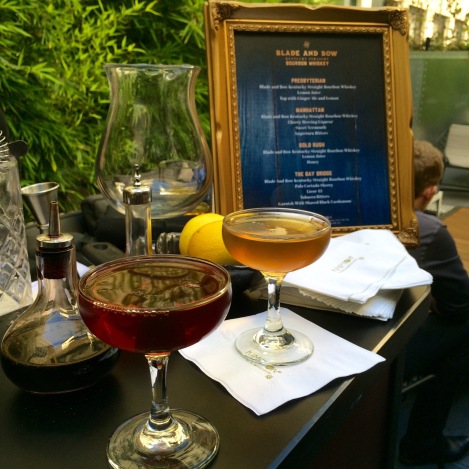 We also tried the Blade & Bow Gold Rush made with lemon juice and honey syrup.  It was the perfect refreshing drink to have on the patio, especially since the weather was on the warmer side that evening.

As we sat and enjoyed our drinks by the fireplace on the patio, the service staff came around with passed appetizers that paired really well with the cocktails.  The bites included chicharron topped with fried pork belly that was doubly porkalicious, braised short rib on mashed potato with red wine jus, and potato bites topped with caviar and spicy aioli. 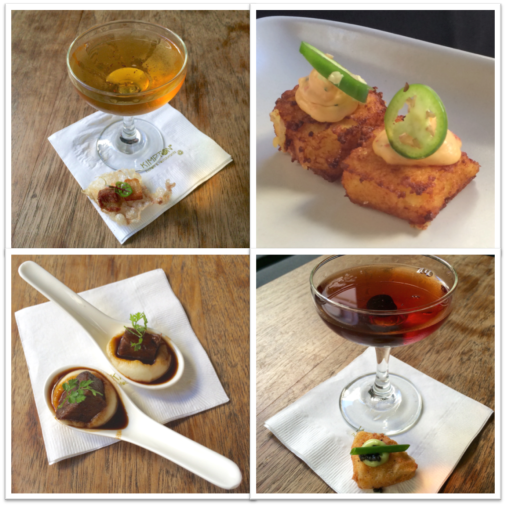 A closer look shows neat pours of the Blade & Bow base and 22-year old whiskeys along with the menu for that evening.

After cocktails and bites on the patio, we were asked to move indoors to take seats as the evening officially began with an educational discussion by Diageo’s North American Whiskey Ambassador Doug Kragel.  Mr. Kragel provided us with the overview and history of Blade & Bow.  He also explained that the Solera System aging process ensures the consistency and taste of the base Blade & Bow whiskeys.  Some of the oldest whiskey stocks, including those in barrels prior to the Stitzel-Weller closure, is mixed in with newer whiskeys and then aged in charred American oak barrels. 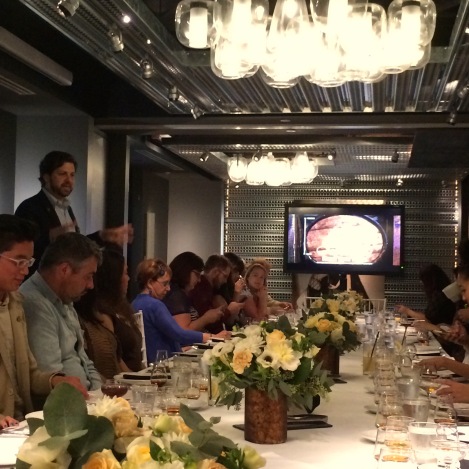 Mr Kragel also led us through the tasting process of both of the whiskeys.  Although we already had some of the base version in cocktails, when tasted neat the Blade & Bow had a light aroma reminiscent of dried fruit with a gentle tobacco finish.  We are definitely planning to stock a bottle or two for our home bar — it’s perfect for sipping and cocktails since it’s relatively easy to find for around $46 a bottle.

The 22-year old version took it up a notch, with a stronger vanilla and toasted grain aroma and a very tasty smooth finish with just a hint of caramel.

Blade & Bow is named after the two parts of a skeleton key, the “blade” shaft and the “bow” head.  In yet another tribute to Stitzel-Weller, the whiskey is named after the five keys that hung on the door of the distillery.  Each key initially represented the five steps of creating a bourbon: grains, yeast, fermentation, distillation and aging.  But now it is also so the symbol of southern hospitality.  Each of the bottles come adorned with numbered keys: they claim that some are rarer than others.  We collected keys numbered “1” and “4” from the event and will have to keep an eye out for the other three — maybe we get to unlock our own barrel once we are in possession of all five.

Once the tasting ended, the feast began in earnest.  We’re just going to say off the bat that we have been to Dirty Habit plenty of times, but the food at this event was completely different and spectacular.  It definitely had a southern slant, which is not something we had experienced at Dirty Habit.  Chef David Barzigan and his staff created an awesome menu that was totally appropriate for the event.

There were three courses served, all family style, but it felt like much more since there was so much food.  The first course consisted of a Butter Lettuce “Wedge” Salad with pickled onions, tomatoes, crisped pancetta and avocado ranch dressing.  The salad was accompanied by a traditional yet excellent version of an Oyster Rockefeller. 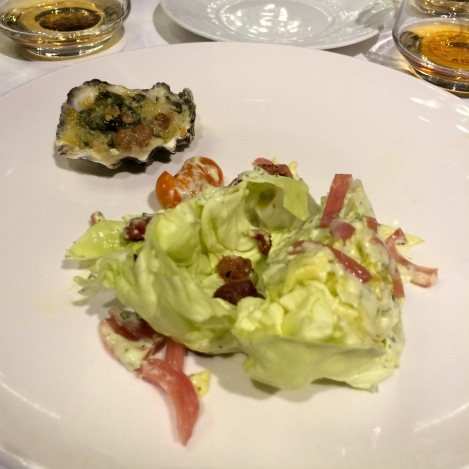 Course two was really several courses in one, as it contained fish and meat entrées with various side dishes meant to pair with them.  First up was baked flounder served in a shrimp sauce with okra and bread crumbs (platter shown left).  Very tasty creamed corn and braised collards greens were provided as side dishes (shown plated on the right).

Then a plate of flaky biscuits with butter and red pepper jelly was making its way around. 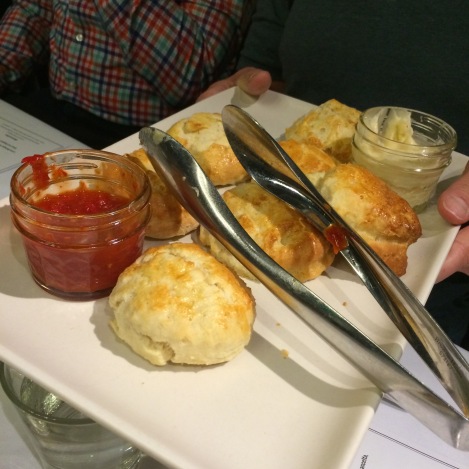 The biscuit was a perfect accompaniment for the delicious Slow Cooked Pork Shoulder with preserved peaches.  The tender pork was truly fabulous and something that we would easily order again, if only it were on Dirty Habit’s regular menu! 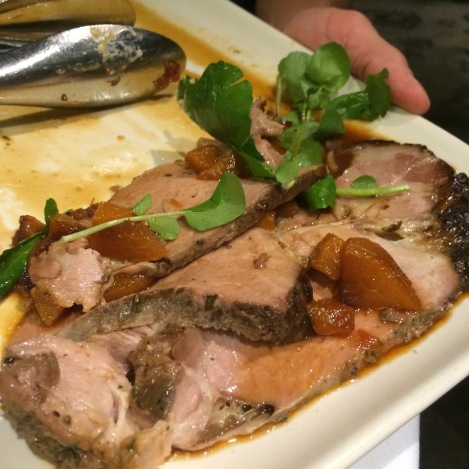 The last course featured a Stone Fruit Beignet (rear) that was supposed to be served with whiskey ice cream, but alas it never made its way to our end of the table — thankfully it was still great on its own.  Also served was a beautiful and delicious Lemon Meringue Pie (front) which came in individual size portions.

Everyone who came was provided with an awesome parting gift: a hand-crafted, charred mini barrel containing fifths of the Blade & Bow Whiskey.  The gift bag also came with a Blade & Bow leather coaster and a pin showing the ornate logo (stamped on the top of the barrel). 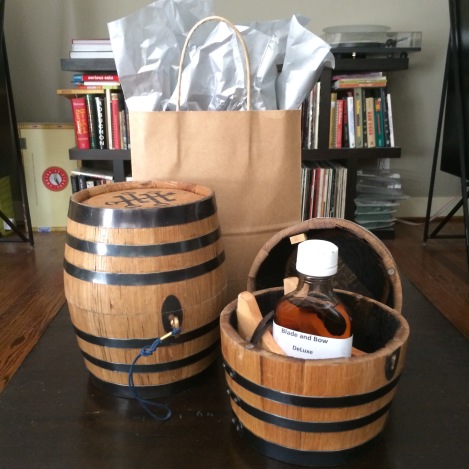 Many thanks to Taylor Strategy once again for inviting us and hosting yet another great whiskey launch in our fair City.  It was a unique way for us to dine at Dirty Habit since we have never been to the patio or private event room.  We definitely enjoyed their drinks and food in a manner we had never experienced before.

Here are the cocktail recipes for making the drinks at home, although we have to admit that drinking the Blade & Bow neat is plenty tasty on its own.

Add all ingredients to a mixing glass. Stir. Strain. Garnish with a cherry.

Add all ingredients to a cocktail shaker and add ice. Shake. Strain over fresh ice into a rocks glass. Garnish with a lemon wedge.

Add all ingredients to a mixing glass. Stir and strain into a Nick & Nora glass. Garnish with shaved black cardamom.

Build in a Collins glass over ice. Top with ginger ale. Garnish with a lemon wedge.