Eating out has definitely gotten a bit more expensive over the past year, as San Francisco’s minimum wage continues to go up (currently at $12.25 an hour with no tip credit for service staff).  So it is with great surprise that a new restaurant, Trestle, would open offering a complete three-course prix-fixe meal for a very reasonable $35 per person.  It is even a greater surprise that the team behind it is the same one as Stone’s Throw, one of our favorite places that opened last year (click to view the post and find out more info about the team).

Trestle is located in Jackson Square, close to North Beach.  It’s a difficult space with a triangular shape to match the street, but they were able to fit in 49 seats in the intimate space. A view of the restaurant looking out to the street shows the sharp angle and a rather large but nice flower arrangement that centers the room. 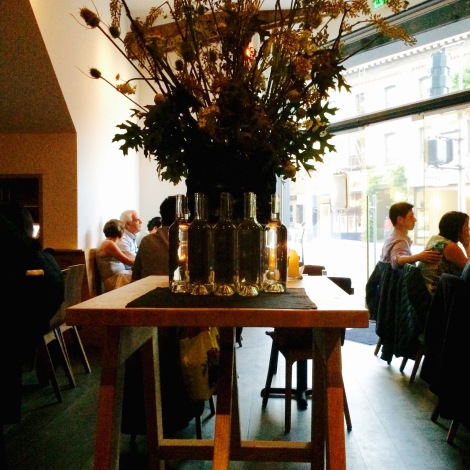 Once seated, the evening’s menu was presented.  The menu, which changes nightly based on market availability, provides two choices for each course.  An optional pasta course can be purchased for $10, and most tables we could see did opt for the fourth course. 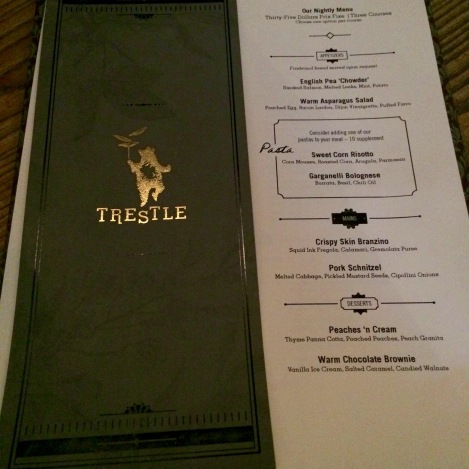 The only other selection to be made is the beverage to pair with dinner.  Limited to beer and wine, the drink menu is as whimsically categorized as they are at Stone’s Throw, with wines categorized as By the Glass, Friendly & Flavorful and Refined & Splurge Worthy.  The list has many domestics, but there are also several old world wines available.  We stuck with the Friendly & Flavorful category and order their last bottle of the 2013 Hiedler Gruner Veltliner, which we knew would pair well with our meal. 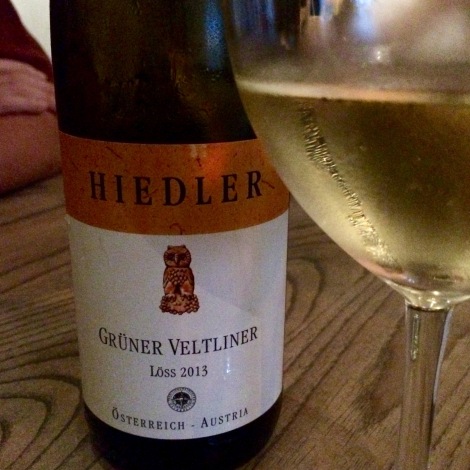 Our first selection from the Appetizers section of the menu was the English Pea “Chowder”: similar-sized chunks of smoked salmon, potato, croutons and melted leeks were spread out in bowl, into which a server poured a thick pea and mint soup table side.  It was truly delicious and hearty for a Spring chowder. 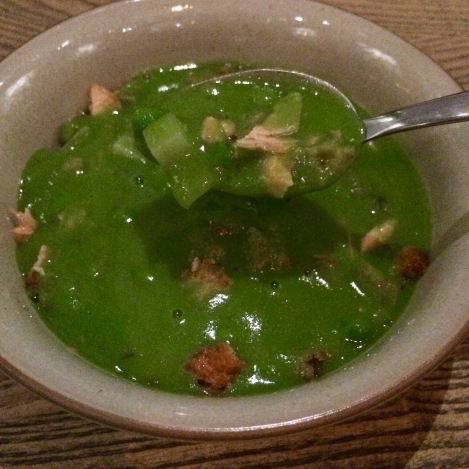 The other appetizer choice, a Warm Asparagus Salad, was served with a poached egg, crisped bacon lardon, puffed farrow, pea leaves and Parmesan cheese — all lightly dressed with a Dijon Vinaigrette.  Both appetizers were really great and reflected their philosophy of providing the freshest ingredients on a plate. 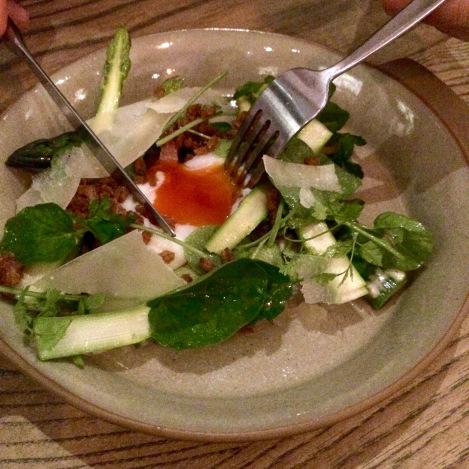 Since there was three of us dining that evening, the server suggested that we share both of the pasta courses between us.  It turns out we really didn’t need them, as three courses was more than plenty, but it was a great way to try out everything the restaurant had to offer.  The first pasta was the Sweet Corn Risotto made with corn mousse, roasted corn, pea sprouts and Parmesan cheese.  It was a tad too sweet and was really more of a thick soup consistency than a risotto.  They might have noticed this was the case too as a subsequent check of the current menu lists a sweet corn soup rather than the risotto. 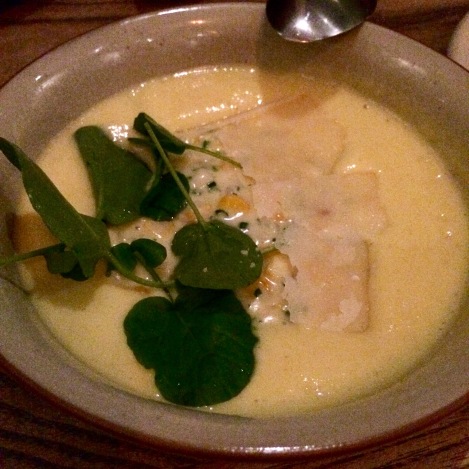 The other pasta option was a Garganelli Bolognese with a giant pile of Burrata Cheese, drizzled with a basil-flavored olive oil. Not that it would be entirely advisable, but we can only wish that all pasta dishes had this kind of cheese to noodle ratio! 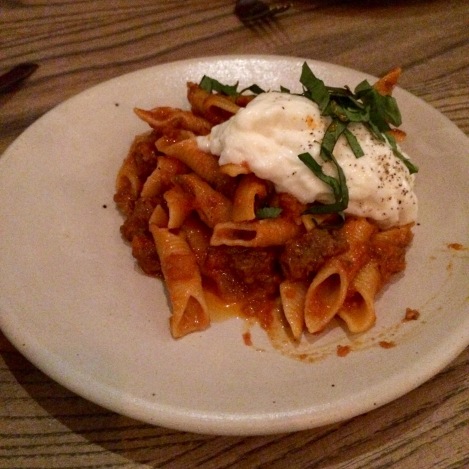 For some reason, some of our courses arrived slower than expected, but we didn’t mind since we just decided to drink through the Gruner and order a second bottle of wine.  We wanted to get a Langhe Nebbiolo but we were advised that they were already out of that bottle.  Between getting the last bottle of Gruner and not getting the Nebbiolo, we suspect the wine list also changes often based on availability.  Not seeing any other reds of interest, we decided to get the very reliable and tasty 2014 Copain Tous Ensemble Rosé of Pinot Noir. 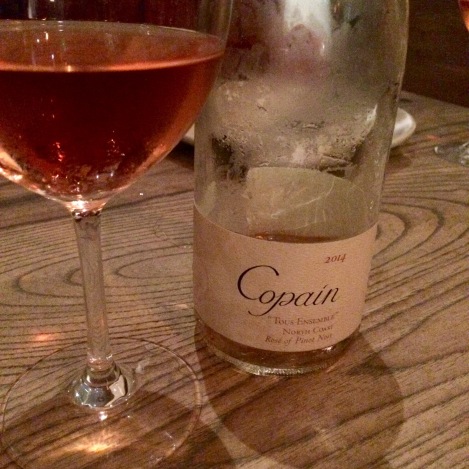 For our main course, we had a choice of a Crispy Skin Branzino or what our server described as the debut of the Pork Shnitzel.  Normally, we would have taken one of each, but we were just not in a pork sharing mood that evening, so we all chose the schnitzel.  The breaded pork cutlet came on a bed of buttery good “melted cabbage,” pickled mustard seeds with fennel and cipollini onions.  It was a really good dish, but with the panko breading we all thought it was closer to a Japanese pork tonkatsu than a schnitzel. The sauce was also slightly sweet and very reminiscent of the tonkatsu sauce condiment.  As of publication, it’s still on their current menu as the schnitzel; in either case, it was porkalicious. 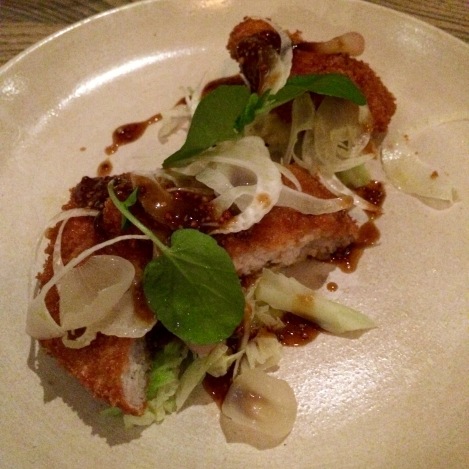 We were pretty sated at this point, and the desserts were surprisingly full-sized versions.  The first option, Peaches ‘n Cream, was seemingly light and airy: a thyme panna cotta is topped with poached peaches, crumble topping and shaved peach granita.  It was a great way to welcome the stone fruit season, and we never knew that thyme would be a great flavor to have at dessert. 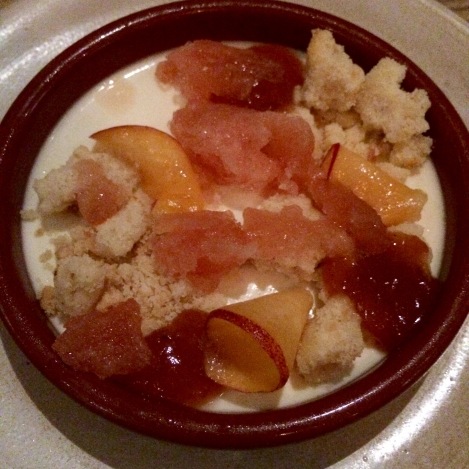 The other dessert would have been worth fighting over, but our stomachs were just so full at this point.  A Warm Chocolate Brownie topped with a salted caramel sauce, candied walnuts and vanilla ice cream is probably everyone’s favorite comfort-style dessert. 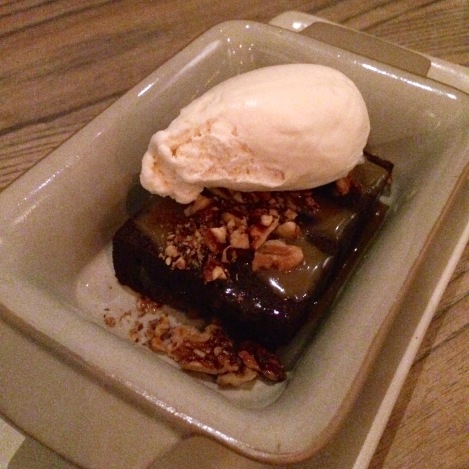 At such a great deal for the nightly price-fixe menu, it will probably be difficult to get reservations, especially on a weekend.  They are fairly new, so we were able to score weekday reservations with just a day’s notice.  With many of the restaurants now including service charges and healthy SF fees in their pricing, it’s refreshing to see a great new place bucking that trend and providing relatively affordable meals.  It’s comfort-food great – just make sure to come prepared with an appetite.