One of the higher profile restaurant openings this year is Octavia, Owner/Chef Melissa Perello’s follow up to her successful restaurant, Frances. Opened last April, it took over the space that we fondly remember as the original location of Quince , and more recently by Baker & Banker before it closed. Frances was named after Chef Perello’s grandmother, and while Octavia is named after the street it is located on, it is an apt moniker for the sequel.

The 50-seat space has been opened up with large windows letting in plenty of natural light by day and emitting a cozy glow in the evenings.  It’s substantially larger than Frances, but feels equally intimate with plenty of wood with a black and white decor. 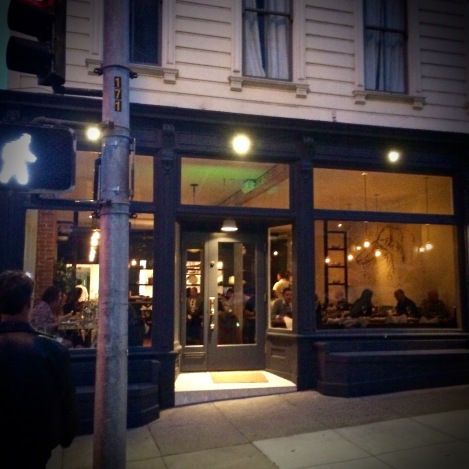 Like Frances, the wine list is also curated by Paul Einbund — it’s been awhile since we last saw the beverage menu at the original, but it seems he populated Octavia’s version with more of the old world wines that we tend to prefer.  We applaud the inclusion of a large selection of vermouths by the glass, and the wines are generally categorized as light, medium or full bodied from “over here” (domestic) or “over there” (Europe).

We each started with food-friendly white wines that are offered by the glass to start our meal:  a German Diel Kabinett Riesling and an Austrian Tegernseerhof Gruner Veltliner.  We also ordered a bottle of French 2011 Domaine Du Grapillon d’Or Gigondas that we asked them to bring early so it might have a chance to breathe. The 80% Grenache, 20% Syrah blend from the Southern Rhône region is one of our favorite wines that we know pairs well with most foods. 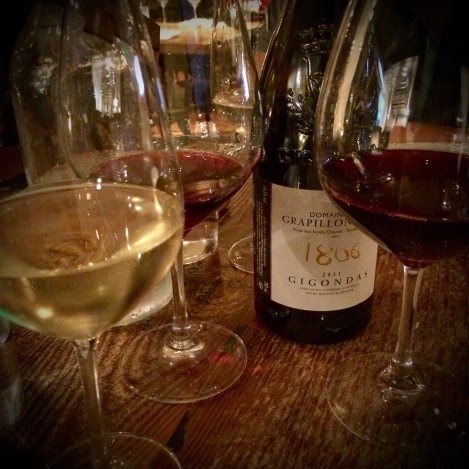 Similar to Frances, the menu is broken up into small snack-size “bites”, appetizers (soups, salads, pasta) and larger entrées.  Portions are ideal for a three-course meal, but as we share everything, we decided to try as many of the smaller plates as we could over our initial visits. Our first visit was within the opening week, and we have noticed that some of the portion sizes have gotten bigger and prices have been slightly raised over the few weeks since then.

From the snacks section, the Chilled Squid Ink Noodles were accompanied by rings, shaved Cortez bottarga, green garlic, lemon oil and fennel fronds.  It was a great starter to share which set the tone that the rest of the dishes would be equally inventive in flavors. 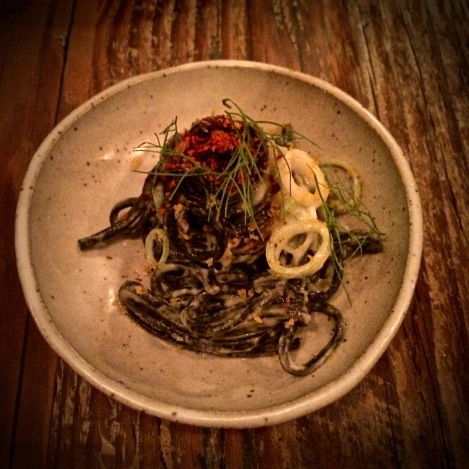 Whereas the squid noodles were served cold, the Toast (also from the snacks section) was served with a warm ricotta cheese and charred spring onion puree.  It was a great representation of the seasonal change to Spring vegetables in a bite (or two). 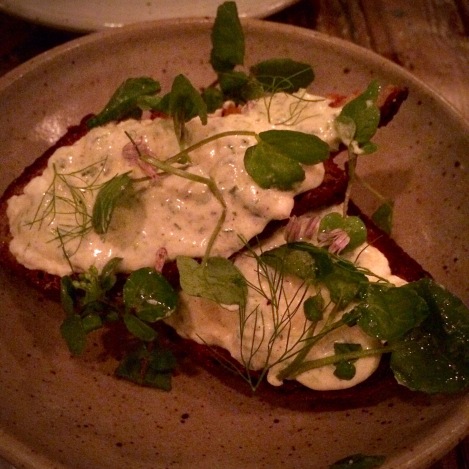 The Brokaw Avocado, English Pea, Persian Cucumber, Golden Beet dish was a great combination of the rich fruit with grilled spring vegetables.  The Avocado snack seems to be a mainstay; however, the accompanying vegetables change with market availability. 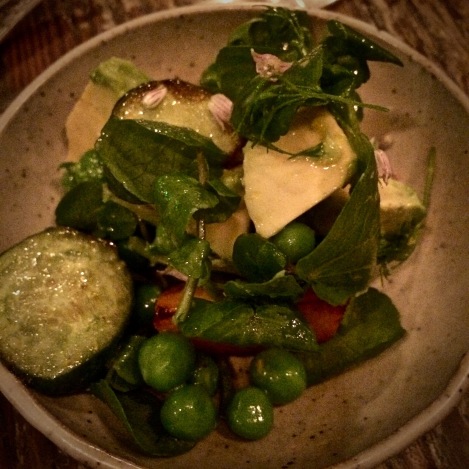 As offal fans, we had to get the Beef Tongue, Charred Broccoli, Toasted Garlic, Marrow Broth dish.  The tongue was extremely tender while the broccoli and toasted garlic were crispy, offering a contrast in textures.  The umami-rich marrow broth tended to gather at the bottom of the bowl, and we happily slurped it up after we ate everything else. 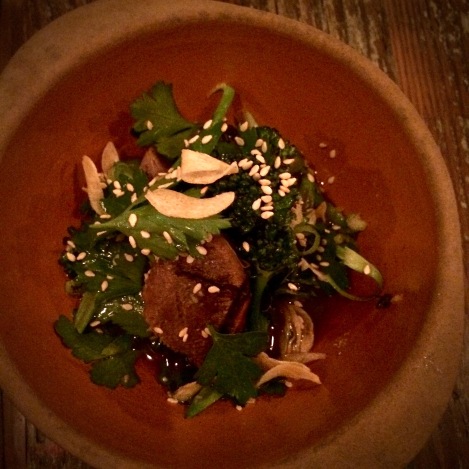 Another snack item, the Mushrooms “A La Greque” with Grilled Levain was a potted mixture of chilled wild mushroom that we “spread” on the toast points. 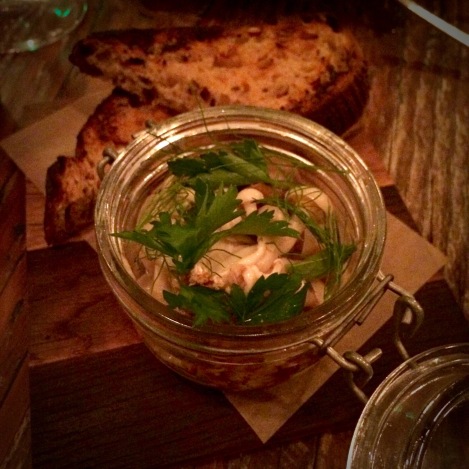 On a subsequent visit, we ordered the last of the snacks that we hadn’t tried yet: the “Deviled Egg,” Fresno Chile Relish, Marash Pepper & Spice (front) and the Fried Artichokes, Pecorino Siciliano, Walnut, Mint dishes (rear).  Like all of the other dishes we had already tried, these snacks were tasty and easily showed Chef Perello’s forays into bolder flavors and a Southern Italian style with the artichokes. 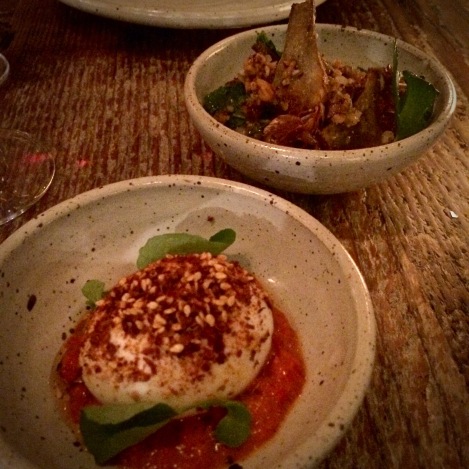 A closer view of the perfectly cooked deviled egg.  Interestingly enough, the dish had just the right amount of spiciness which was milder than its appearance. 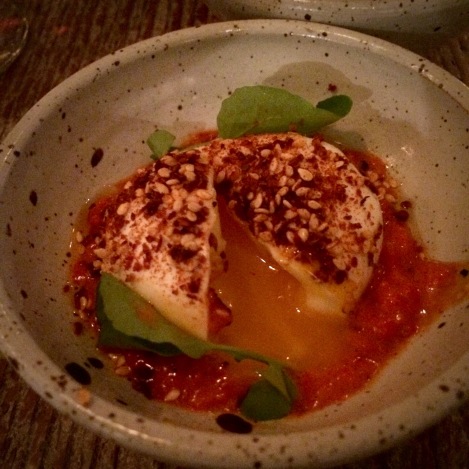 The only dish from the middle section of the menu that we tried was the lone pasta item offered: Paccheri, Savory Clams, Aleppo Chili, Fennel Pollen Pangrattato.  The sweet, small unshelled clams were hidden beneath the al dente cooked pasta tubes.  Since the opening menu, we have noticed that the clams have been replaced with Olive Oil Poached Baccalà, but we hope that the shellfish might one day make a reappearance. 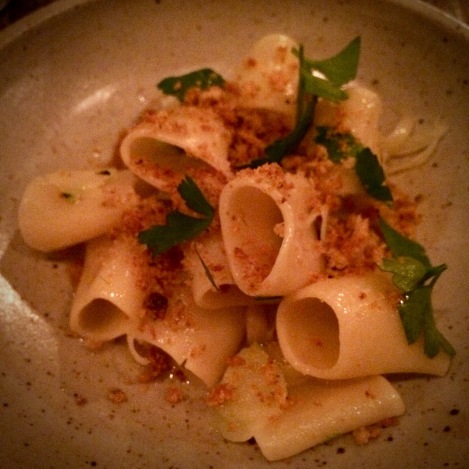 The menu usually contains four larger entrées with a selection of beef, poultry, fish and vegetarian options. The options change based on market availability, and on one of our visits we had to get the vegetarian dish of Sweet Onion & Spring Vegetable Panade, Josey Baker Bread, Parmesan.  The “bread casserole” was really delicious and tasted market-fresh. 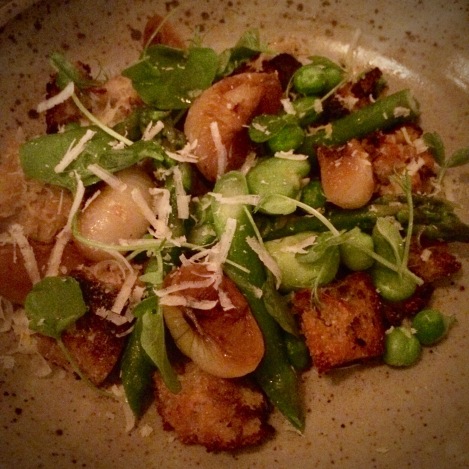 On another visit, we ordered the Sicilian 2011 Azienda Agricola Arianna Occhipinti SP68 Rosso, one of our favorite bottles, a blend of Nero D’Avola and Frappato.  Wine markups are reasonable at 2X retail, and this was a good find since it had a couple of year’s of aging over the current release (note the latest menu includes 2013 vintage).  We knew that this wine would be a great pairing with all of the various dishes, but especially the steak. 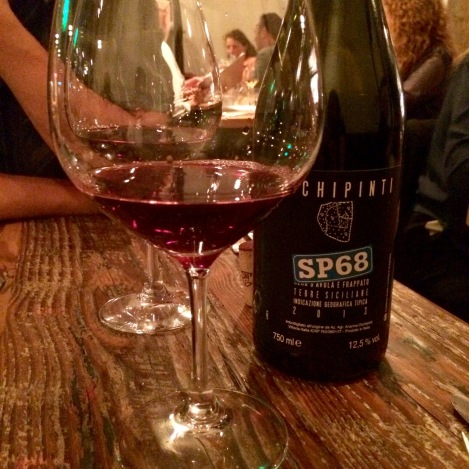 During our first visit, they offered a bone-in Dry Aged Beef Rib-Eye, Watercress, Wild Ramp & Stilton Butter that was listed at “market price.”  It was a great deal for $42 and easily fed both of us as a lone entree, especially after all of those snacks. 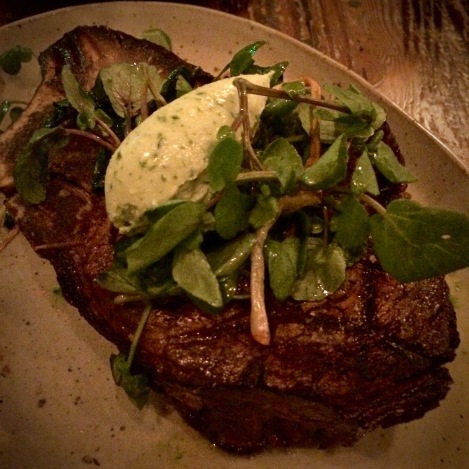 We ordered the rib-eye rare and it arrived perfectly cooked.  The stilton butter was a perfect condiment to the thick-cut steak, and the watercress added a nice pepper flavor to the beef. 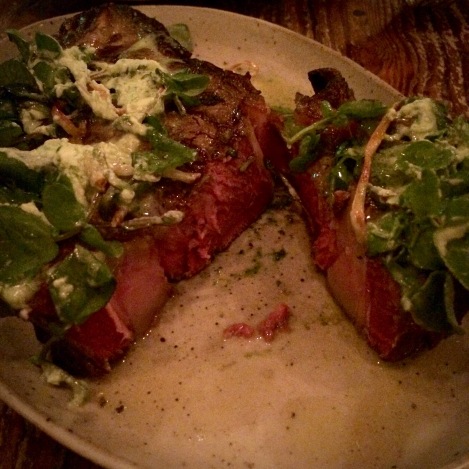 We were so impressed with the steak from our initial visit that we made a point to come back just to have it again.  We really thought that it might be one of the best steak preparations that we have had in the Bay Area, rivaling many of the steakhouses.  But by the time we came back a few weeks later, the initial bone-in version morphed into a boneless Brandt Farms Beef Rib-Eye, Charred Radish & Baby Turnips, Stilton Butter at a cost of $38. Disappointingly it was still good, but not nearly as great as the first version we had.  This update contained more vegetables in the form of radishes and turnips, and the stilton butter pretty much disappeared — a small amount was smeared onto the plate underneath the steak.

We don’t generally order desserts, but we had to try the complete experience and miraculously had room for one during one of our visits.  The Warm Chocolate Soufflé Tart Cocoa Nib Brittle, Salted Caramel Ice Cream was sweet with a touch of savory that served as a perfect ending and pairing for the last of our red wine. 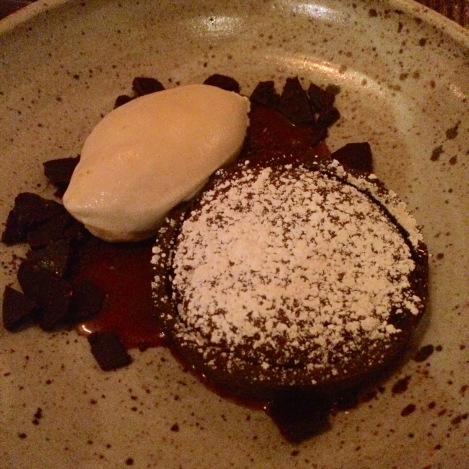 Octavia is a successful “sister” restaurant to Frances, and is a great showcase for Chef Perello’s ability to put together market-fresh fare in bold combinations. Like Frances, the service is great with the right amount of pacing. We definitely prefer the wine list and roomier ambience here over that of Frances, and it seems easier to get reservations due to the larger space (at least for now). If only we could get the initial version of the ribeye steak again.