San Franciscans are very lucky when it comes to great Italian restaurants. What is unusual is that we have restaurants that specialize in food from specific regions in Italy. SPQR represents Rome, Perbacco targets Piemonte, Albona spotlights Istria, while A16 and Locanda focus on Southern Italy. Noe Valley’s La Ciccia, owned and operated by the husband and wife team Massimiliano Conti and Lorella Degan, transports us to the island of Sardinia. While La Ciccia has served as a true neighborhood gem for more than eight years, the successful duo opened a second restaurant located around the corner, La Nebbia, almost a year ago.

With seats for only 40 people, rubbing elbows and unwillingly sharing conversations with neighboring tables is not unheard of at the intimate La Ciccia. Lorella works the front of the house and warmly greets all diners, while Chef Conti concentrates on the kitchen with occasional forays into the dining room. La Ciccia’s menu is pretty comprehensive, separated into Is Antipastusu e Is Inzalaras (appetizers and salads), Is Primusu (first courses), Is Pizzasa (pizzas), Is Segundusu (second courses), Pratisceddussu (sides) and Su Casu Sa Frutta e Is Druccisi (desserts) categories. Portions are very generous so make sure to come with a hearty appetite to make it through three courses (or plan on sharing like we tend to do).

Their wine list is also very extensive, with more than a hundred bottles from Southern Italy and literally dozens of Cannonau di Sardegna. It’s something of an eye chart with very small print that gets more and more challenging for our aging eyes. We always try a different wine, and on this visit we selected a Librandi Cirò Rosso Riserva Duca San Felice Librandi made with 100% Gaglioppo grape to pair with this meal:

We usually like to start with an order of Pani Guttiau, the Sardinian cracker-like flat bread baked with olive oil and Pecorino cheese, but we decided to go the healthy route and ordered a the Inzalara de Birdura cun Acciugasa e Casu, a salad made with organic mixed greens dressed with an anchovy dressing and topped with anchovies and grated Pecorino cheese:

We’re suckers for tripe, so we had to get their version of Trippa alla Parmigiana featuring the offal in a rich tomato stew:

We also like our uni, and Chef Conti’s urchin sauce on any pasta is always a must-order for us. In the past, the urchin pasta was made with spaghetti or fettuccine pasta and was usually a special for the evening when available. Now the rich urchin dish is semi-permanent on the menu as the Fregua Sarda cun Arrizzonisi e Cori de Tonnu. Toasted Sardinian fregola is mixed with the tomato-urchin sauce and liberally topped with cured tuna heart shavings. It’s a satisfying dish that deserves to be tried by all, even those who are squeemish about urchin: 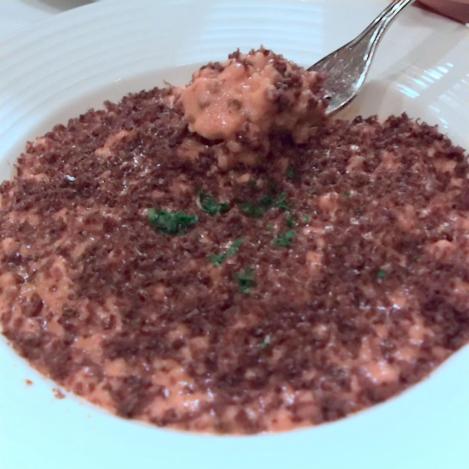 We usually like to get a pizza as well, but both the dishes were so hearty and rich that we didn’t have room. We’ll save the pizza and pani guttiau for our next visit, that is if we ever make it past the urchin pasta dish.

While La Ciccia kept us on the island of Sardinia for food and wine, the follow up restaurant, La Nebbia represents edible fare from the other regions of Italy and, in the case of hams, Spain. La Nebbia literally means “the fog” which is not only an appropriate name for a restaurant in San Francisco, but also represents the element that helps wine grapes grow and is essential to the aging process for salumi and cheese. It was initially opened as an enoteca (wine bar) featuring prosciutto, pizza and cheese; however, Chef Conti recently expanded the menu to include more hot items. Their menu is divided into the following categories: Starters and Other Refreshing Beauties, Pizza, Hot Items from the Oven, The Pig Selection … Cured Meats, Salumi Flight and Dolci (desserts).

Thankfully, La Nebbia’s wine list is not an eye chart; the Italian-centric list offers about 50 wines from various regions. We instantly spied a bargain: this decade-old Barolo from Virna Borgogno (daughter of the maker of Borgogno wines) which was priced just above retail. As big fans of the regal nebbiolo grape named after the fog in the famous Piemonte region, we found this Barolo to be darker than usual with great complexity and acidic balance to pair with our meal:

They have cured hams and salumi from both Italy and Spain which can be ordered individually or in taster flights. The three options for flights include Ferrarini Salami, The Spaniards and The Italians. We don’t want to start a ham war, but we find that we like our Spanish salumi, so we ordered The Spaniards. Generous slices of Lomo (cured tenderloin) and Iberico and Serrano hams were served with crostini and an antipasto salad:

We ordered the Burrata Eggplant Caponata Agrodolce from the Starters section; but unfortunately, we dug into it before taking a photo of it. But there was enough left on the plate to give an idea of what the dish is like. The eggplant caponata was lightly sweetened with raisins, which paired really well with the creamy burrata cheese:

Also from the starters section, the Artichokes Moliterno intrigued us enough to order it. What came was a refreshing artichoke salad with mixed greens, radishes, green onions and shredded Sardinian Pecorino cheese (Moliterno):

We were torn between ordering the Traditional Lasagna or these Pork and Beef Meatballs. Since we were already getting full, we went with the smaller dish of tasty meatballs served with a tomato sauce, wedges of Pecorino cheese and crostini:

We don’t normally do desserts, but spied an item from the three-item sweets menu that reminded us of something we ate during our recent trip to Spain. The Fresh Riccotina Honey Citrus Compote was reminiscent of what we had in the Priorat region, where they serve fresh Ricotta cheese with hazelnuts drizzled with honey. La Nebbia’s versions is very similar, replacing the crunch of the nuts with biscotti — it offers just the right balance of creamy and sweet that made for a perfect ending: 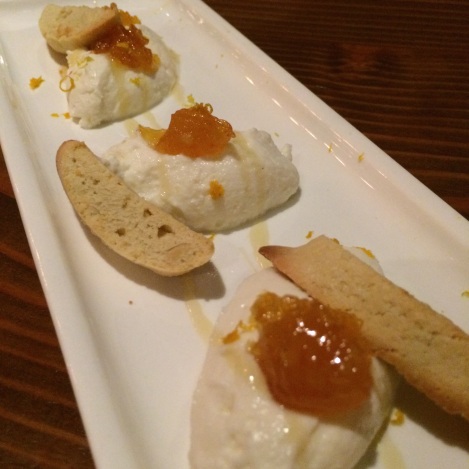